Are Electronic Signatures Binding In Australia? 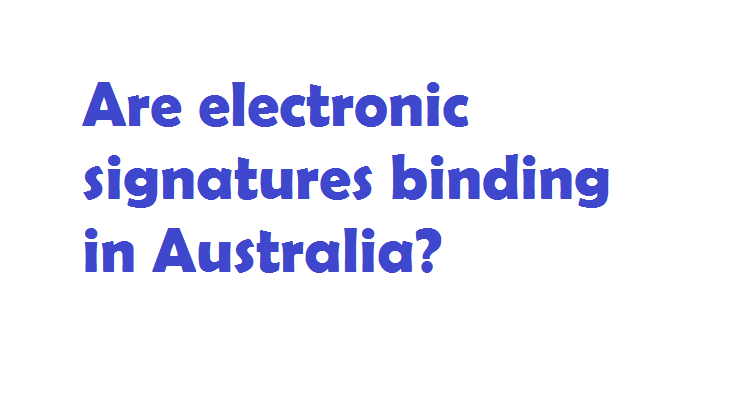 When it comes to modern digital technology, Australians have a seemingly avid appetite. According to a study conducted by P&S Market Research, Australia is one of the rapidly emerging markets for e-signature usage. The study also forecasts that global eSign market will experience substantial growth of 39.2% annually between 2016 and 2020.

However, as more Australians add eSignatures to their digital processes, a lot of them are hesitant about the law. Are electronic signatures legally binding? What handy steps should an Australian business take when electronically signing a document?

Validity of electronic signatures in Australia

The use of any signature, may it be a wet-ink or electronic signature, is to show intent in regards to the information contained in a document. The use of electronic signatures in Australia is usually governed by state and Federal legislation – the federal law being the Electronic Transaction Act 1999, while its counterpart state and territory act applies to different respective jurisdictions.

The general rule according to these legislations is that: a transaction is not illegal just because it was executed partly or wholly using electronic communication. Notably, a legal prerequisite for an electronic signature is fully met if the following conditions are fulfilled.

Uniform electronic transactions in the states and territories

Documents that can be electronically signed in Australia

Most agreements and contracts can be electronically signed in Australia. In practice, they include key documents used in normal day-to-day activities, such as;

Cases where e signatures are invalid in Australia

By law, certain types of documents still require being signed with the typical wet-ink signature. However, it is anticipated that with time, these exemptions will narrow to contain the rising use of e-signs in business transactions. You may not sign the following electronically in Australia.

1. Documents that require to be registered

While it may be okay for some documents which require to be registered with a 3rd party to be electronically signed, this does not imply that they will automatically be admitted for registration of that nature. In such circumstances, it is always advisable to confirm with the registering authority to make sure that it will admit a document signed electronically.

2. Documents that need to be witnessed

There are some discrepancies concerning the ET legislation as to whether a document may be witnessed for e signature. The general law concerning the electronic witnessing of documents is much untested. Therefore, it is recommended that you get pertinent legal advice if you wish to use e-signs to witness documents.

3. Documents signed in regards to the Corporation Act 2001

The Commonwealth ET laws are not applicable to the corporation’s Act. In fact, the facilitating procedures defined in the Corporation Act about the signing of a document by a company based in Australian are very different from the ET laws. This does not, however, disqualify an Australian company from electronically signing other types of documents.

Organizations around the globe are transforming their operations, replacing labor-intensive, paper-based procedures with electronic alternatives which reduce costs, increase efficiency, and present a competitive advantage. Digital signatures, therefore, can provide immeasurable benefits, and Australian law has been crafted to encourage this transition.

At eSign Genie we are aware of the laws relating to e signatures around the world. Most importantly, we are well equipped to offer services for e-signs in the U.S. Canada, Europe, India, and yes, Australia and many more countries. In short, if you are based in Australia and your organization is yearning to make electronic signatures and start signing documents online, then you are in the right place. We will ensure that your e signatures are compliant with Australian law.

DISCLAIMER: The information in this eSign Genie blog is for general purposes only and is not meant for companies to use as legal advice. Please confer with your attorney for legal consultation for your location and specific use cases.